This website provides a neat and flexible way of finding out the area of a KML polygon without needing GE “Pro”: http://www.earthpoint.us/Shapes.aspx

It’s nice to see that Google Earth draws and measures lines as great circles – i.e. lines follow the surface of the globe – or geodetically speaking, the spheroid. It’s fairly obvious, really, given the 3-D nature of GE, but it’s not something you take for granted in a GIS, where measurements are generally made on a projected plane of some sort, and the result depends on the projection used.

As a sort of confirmation of this, I measured the distance from the north pole to the equator, the orange line here:

The reported result was 10,001,959 metres. Multiply this by 4 to get a circumference of the earth (a minimum circumference, given the flattened, oblate nature of the spheroid), and you get 40,007,836 m.

Look up the ‘textbook’ value of this circumference, calculated from the equatorial radius and the flattening factor, and you get….. 40,007,863 m.

So, it does indeed look as though Google Earth (a) measures on the spheroid surface and (b) it uses WGS84. all of which is perfectly well known anyway, but it’s nice to confirm it….

Sometimes it’s frustrating not to be able to alter the display of basemaps provided by ArcGIS Online. In this case, I was using “World Shaded Relief” (on account of its high, SRTM-derived resolution, but didn’t want its reddish hue. Further, although the transparency of an AGOL layer can be altered, other display properties (brightness, contrast, resampling) cannot be changed.

So this article came  to the rescue: Creating a grayscale version of any ArcGIS Online basemap. It’s somewhat convoluted, involving the creation of a Mosaic Dataset, so I won’t try to repeat the method here. However, it did work, and I was able to alter the colour balance and contrast.

I found a further benefit: after adding the new layer and changing the display as needed, it was then possible to export the data to create a local copy, available for off-line / low bandwidth use.

It’s easy to copy symbology between layers in ArcGIS (Layer Properties > Symbology > Import > from another layer), but there’s no equivalent for labels. If you’re using “Label all features the same way”, this doesn’t matter much; it’s easy to re-create the label style. But if you’re using several label classes, then re-creating all of the query expressions as well as the label styles isn’t a great prospect. This is an official “ArcGIS idea“, but in the meantime this neat add-in tool, “Import labels from another layer“, does the trick perfectly.

ArcGIS 10.1, trying to add new features to a Shapefile: make it editable; set up an editing template; but the relevant layer refuses to appear in the ‘Create Features’ window. Why?! Well, it seems to be a side-effect of the way that ‘Create Features’ works, explained in an ESRI blog. While editing templates are useful, isn’t this a rather disproportionate level of complication for an everyday operation?

I’ve spent quite a lot of time trying to understand the differences between the several flavours of the “web mercator” coordinate system used by many web-based mapping systems to store and present their data. Various names, various EPSG codes, various definitions and various conversions are all in use. So I was pleased to come across this detailed explanation. It’s not a quick read, but it does make sense of a fraught field – thank you to Alastair Aitchison.

From my trip to Tanzania in February this year:

There seem to be more and more habitat models being published. The idea is usually to take a set of geo-referenced records of a particular plant or animal in an area; find a statistical association with a gridded set of environmental variables; then extrapolate the likelihood of that species occurring in all of the grid squares in the study area. The result can be called a habitat suitability index, or a similar term, and can be used to help inform management policies, protected area planning, and forecasting the effects of future change scenarios.

I guess that the increasing number of such modelling efforts is in part due to the very welcome increase in environmental data – factors such as rainfall, elevation, protected areas, towns, rivers, land cover and vegetation indices are readily available for pretty much anywhere in the world. Added to this is the availability of free software, GIS and statistical, as well as far greater access to computers and knowledge of relevant techniques.

So I was interested and pleased to come across this piece from Colin Beale at York University: it is not only a constructive critique of a particular research paper that used such techniques, but it widens the discussion to the nature of explanations in biology:

If you want the full, self-contained installer for Google Earth, rather than the default web installer, here’s the answer.

From a remote sensing perspective, being in Juba in 2007 was slightly frustrating: although Google Earth covered South Sudan’s capital with a hi-res QuickBird image, it remained stubbornly in 2003. Sometime during 2010 however it was updated, to a 2009 GeoEye image. Comparing the two shows just how dramatic the urban sprawl has been. 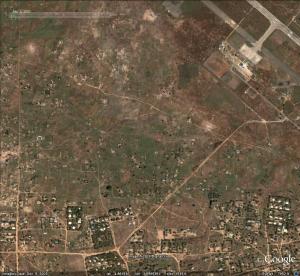 In fact, most of the growth in this patch has been post-2007: when I left then, the situation was much as shown on the 2003 picture, so most of the building has taken place in just two years.

Note that the US consular swimming pool, in the leafy compound  south-centre of the image, is visible in both, a reflection perhaps of American intrests in the area!

Google has just added some recent imagery from GeoEye to its Earth servers: very recent, in fact, from 30th January 2011, covering several parts of Southern Sudan. In Juba, the clearest change since the 2009 imagery (above) is the colour of the roads. Red has turned to grey: the seemingly endless construction programme has resulted in a lot of paved surfaces. It’s not just the airport road, but all of the main routes around town. A lot less dust in the air, I imagine. 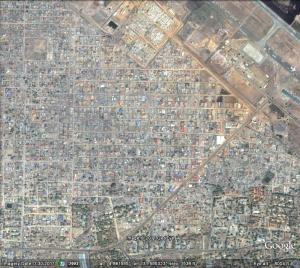